Emma Hayes: Learning to live without my mum 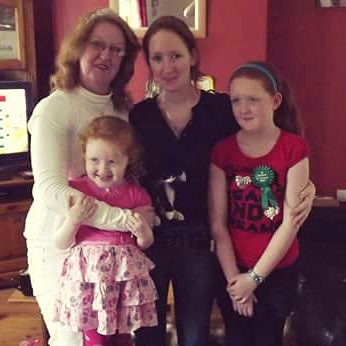 Don’t let someone you love down – be there, as they won’t be there forever.

Today is the day.

Today I must learn how to live without my mother in my life and right now, in this moment I have no idea where to find the strength to do so. Losing someone you love is always hard; I know that. I have lost people I have loved dearly but this…this is different. I already recognise the differences in me, my mood and my outlook. I am lost.

I had plenty of warning – I knew this was going to happen yet somehow, I pushed the reality aside to deal with it ‘in the moment’ rather than let myself mourn her impending death. So now I am left shattered, broken and sad as everything from the last few years comes to a grinding halt. The rushing, the worry and the battle to keep mum healthy and I lost; we lost.

In March, mum went into hospital for the last time from home. It was a day I remember well as my kids were breaking up for Easter holidays and I was looking forward to the break. It only ever takes one phone call and in an instant, you are catapulted into hell. It was bad, bad enough to warrant thinking the worst. In the days that followed, mum went through horror – some days she didn’t know what was going on, she suffered psychosis, hallucinations and fear. If we left her side for a minute she would flip out and then on the other days she didn’t realise who we were before constantly latching to one word and repeating it over and over and over again. Then she got a little better but not without its problems, she was a nervous wreck. Having fought for her life so many times at this stage she was a fractured lady. That day I begged her not to give up fighting; I begged her to stay but with her current state of mental health it was hard to know how much she understood. Days and weeks followed in a horrible rollercoaster of ups and downs with another infection attacking her before she went back to hallucinations and battled to come back to us.

The funny thing is you always think you have seen the worst because you think it is the worst thing ever, but I have learnt that everything can get worse in time. Soon, she couldn’t breathe on her own and she lay in the bed with tears streaming down her face but mute. She withdrew, and you could sit beside her for hours without her uttering a single word to you. We begged her to eat but she couldn’t, and she developed a dependency on the breathing machine leaving her helpless and it was then her medical team told us we didn’t have long – that was 5 weeks before she died.

We never told her, we decided that her anxiety and fear would become worse if we did so we told her she was terribly sick but never that she was leaving us. We hoped she could get better. Without eating, she didn’t have long and because of her spinal disease that left her paralysed she was not a candidate for a food tube. In the weeks before her death she did start to chat and had her good and bad days. She relied upon the machine for breathing, she couldn’t eat and drank very little. Her pain was extensive, and it will haunt me for the rest of my life watching her wince in pain, and weep silently. Mum couldn’t be alone, and she was only left at night time, before that we did shifts of hours on end to ensure she had someone right next to her always. As I clocked up many hours in the hospital every single day – along with trying to freelance – I began to fall apart. In the last few weeks I have questioned my own mental health and have hit that brick wall many a time. Only last week I went to Dublin for work, but I had half an hour to sit and read; I felt human again. I feel guilty for that as now she is gone, and I’d do anything to go back to running up to the hospital again.

The night before mum died I did the ‘late shift’ and we had the best conversation – one that I will share with everyone one day. I tucked her in like I always did – she was freezing all the time, needing ten blankets. I massaged her paws (I called them that to make her laugh), I lay beside her watching her sleep and before I left I woke her to say good night. I told her to “stay out of trouble” – a common joke as I hit my fist into the palm of my hand. She promised she would and I gave the woman I love the last gentle kiss followed by a big cuddle into her. She said, “That’s lovely and I love you loads, I’ll stay out of trouble.” By the next morning she had fallen asleep and she wouldn’t wake again. My mum had hours to live and sadly, she died later that afternoon.

Now, days later it is finally hitting me. Today I should be in the hospital, I should be filing her nails, cleansing her face and rubbing her hands. I know she suffered and her pain is finally gone but behind her she leaves people who loved her. I miss her already and she had it so tough for so long rarely spending more than 3 months at home in a year, for the last few years. I don’t know how to begin to be normal when hospital visits and minding her were part of my being. I guess time will heal me and my family. For now, I am going to let myself grieve and mourn while putting myself first – just for a little while anyway.

If you love someone don’t ever walk away unless they know how much you love them. I take comfort in knowing she knew how much she meant to me. I didn’t have to say things to her, I showed her by being there and that’s all sick people need. Don’t let someone you love down – be there, as they won’t be there forever.

I’ll make you proud mum and I love you but then you know that already.

About Emma Hayes:  Emma is a member of our freelance team and her writing can be found over on https://www.facebook.com/emmasjots/

This website uses cookies to improve your experience while you navigate through the website. Out of these, the cookies that are categorized as necessary are stored on your browser as they are essential for the working of basic functionalities of the website. We also use third-party cookies that help us analyze and understand how you use this website. These cookies will be stored in your browser only with your consent. You also have the option to opt-out of these cookies. But opting out of some of these cookies may affect your browsing experience.
Necessary Always Enabled

Any cookies that may not be particularly necessary for the website to function and is used specifically to collect user personal data via analytics, ads, other embedded contents are termed as non-necessary cookies. It is mandatory to procure user consent prior to running these cookies on your website.